Mandatum novum do vobis (A new commandment I give to you): Maundy Thursday (13th April 2017) 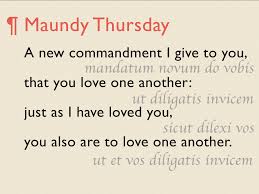 ​About twenty members and friends of St. George's congregation gathered in John and Lynn's home to celebrate the end of Lent and to remember the final Passover meal that our Lord shared with His disciples. During this time together, the worship was led by Rev David Phillips who, in a very helpful and poignant address, began by explaining that the word 'Maundy' is derived through Middle English and Old French 'mande' from the Latin 'mandatum', which is the first word of the phrase 'A new commandment I give to you'. We were then reminded of the roots of the Passover meal, its significance, and its meaning in relation to the sacrifice of Jesus.

The evening was interspersed with Scripture lessons and prayers which were led by a number of individuals present including Jeff, Liz and John, and included a beautiful and tasty meal which had been lovingly prepared by John. The evening was drawn to a close with fellowship in the sharing of bread and wine, before everyone left in traditional silence. It was a wonderful and spiritually enriching evening which will be remembered by all those present.    (John Honeyford) Easter Sunday dawned sunny and warm, and with it came a feeling of bubbling anticipation - not only because it was Easter Sunday but because we were going to be back in our home church, St George's. In fact it had only been a few months, but, it being winter, it had seemed a very long few months. In the meantime we had been using the small chapel of Notre Dame de Paradis in Vernet les Bains, courtesy of the local Catholic church.

So at last, here we were again. And it was lovely to be back. What perfect weather to celebrate Christ's resurrection. It was good to see the familiar faces of friends who share their time between St George's and their churches back in the UK bolstering our small, regular, congregation. About 30 people in all plus 3 dogs! The organ rang out (thank you, Lynn, for your wonderful contribution) and our voices sang with it. Not bad for a motley crew of ex-pats! Our Easter service was joyful, prayerful and thought-provoking (cracking sermon; puzzling in parts, educational, interesting and living up to my usual expectations!) all rolled into one, thanks to David, our wonderful vicar.
​
And afterwards? Well Simnel cake, Easter eggs and coffee of course, while we filled the church with a different kind of noise: the sound of voices nattering away catching up with each other's news. 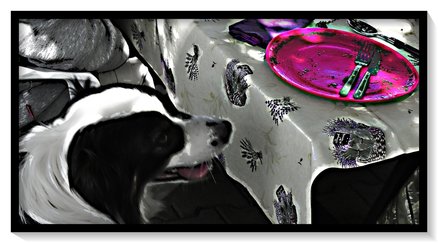 After celebrating our Patronal Festival with Holy Communion in St George's, nearly twenty made the journey to Los Masos, the beautiful commune of four villages just beyond Prades, and the home of Doug and Brenda Myers. Once Steve and Sue had tracked us down, we enjoyed salads, a beautiful casserole cooked by Brenda, a comprehensive cheese board, and an all-too-tempting selection of deserts. Sadly for Bella, looking patiently on, none of it was intended for her. Nevertheless, she and the three other dogs seemed to enjoy the occasion every bit as much as the people, making fine new friends in the shape of Doug and Brenda's tortoises. The stoicism with which one of the latter seemed prepared to face his or her imminent demise was an object lesson to us all. Fortunately, he (or she) was plucked from slavering jaws in the nick of time, and seemed totally unaffected by his (or her) brief ordeal.

​Our shared lunches take place every month in a home somewhere in or around Vernet, usually on the last Sunday, and everyone is welcome. Just ask the hosts what they would like you to bring, arm yourself with cutlery, crockery, glass and beverage, and make sure you know where you're going before you set out!     (Jeff Ladd) 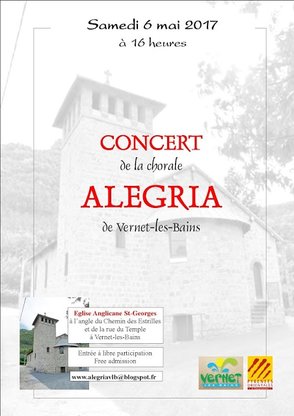 ​You can hear an extract from the concert by Alegria by clicking on the link below. The reredos behind the choir is not normally shrouded in black; we were having some work done on the ceiling!

​There was a good turnout for this professional concert in the 2017 Casals Festival; two French Romantic works for strings and piano framed a recent composition by local composer Daniel Tosi for wind quintet, percussion and reciter (the composer). The Saint-Saens and the Chausson were given polished and colourful performances which were greeted with great enthusiasm. The Tosi took five Surrealist texts, translated into French from the original Spanish, each recited over a simple percussion accompaniment and followed by a densely-textured, atonal episode in for the wind players. It's a shame that no copies or translations of the text were provided for an audience that contained a number of non-Francophones. I don't think I was the only one there who was somewhat baffled by it all.

This year, one of our churchwardens, Douglas Myers, and his wife Brenda celebrated their Golden Wedding Anniversary. Surrounded by family and friends they renewed their vows to one another in a short service of Blessing after the morning Communion Service. The couple, who had written their own promises, chose  the same hymns from their wedding service and another that meant something special to them both. Brenda and their daughter Kathryn decorated the church beautifully with flowers in yellow and purple, the original colours of the bridesmaids' dresses. The whole church rose to applaud their exit to the tune of Jeremiah Clarke's Trumpet Voluntary, another favourite from the original service. We wish them many more happy years together and were delighted to have been able to share in this wonderful occasion with them.                  (Lesley Phillips) 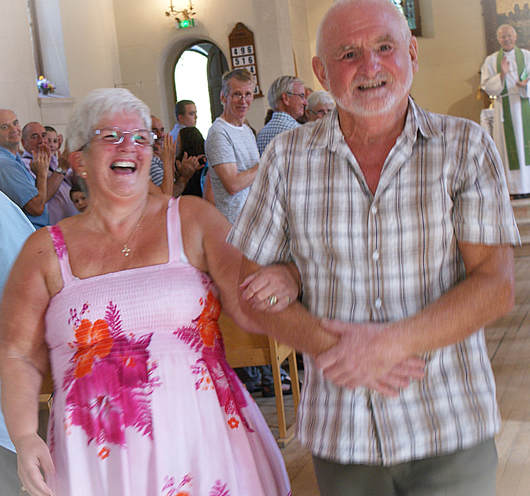 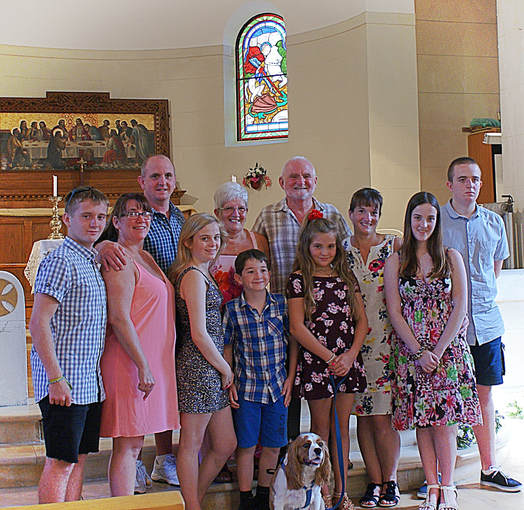 Dufy was a prolific painter, illustrator and designer. Born in le Havre, Dufy worked in Perpignan in the 1940s and visited Vernet. You might recognise this landscape!

A wedding at St George's: Rachel and Sam North 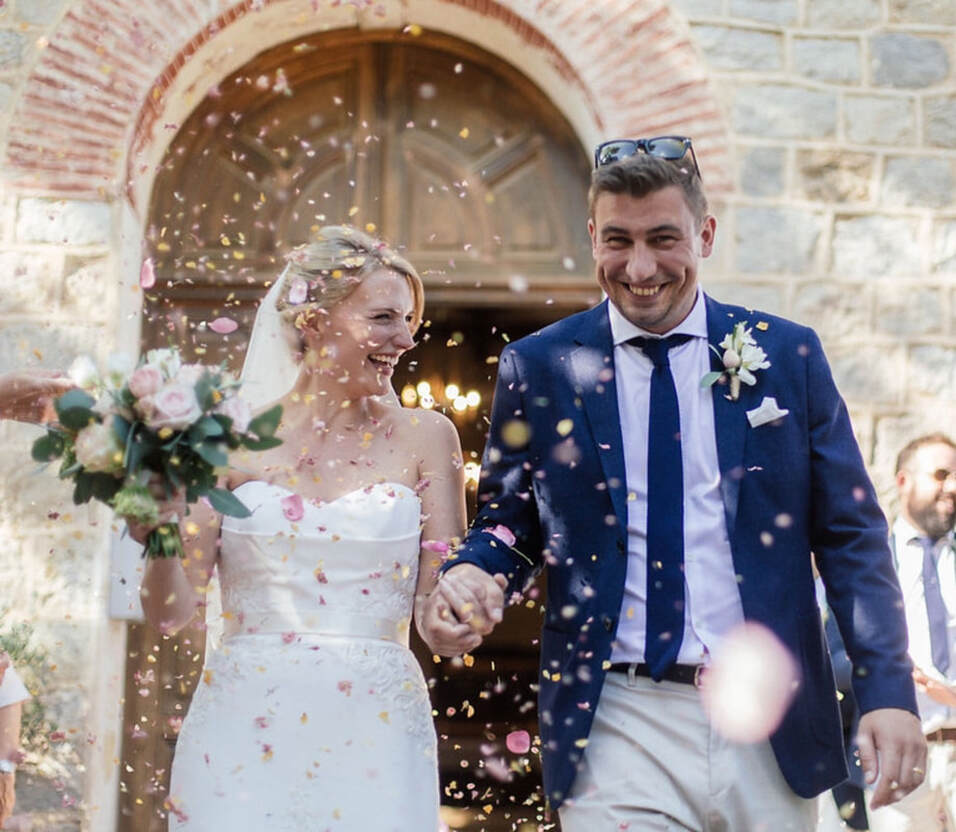 ​August 27th 2016 arrived with a brilliant blue sky, not a cloud in it, and a temperature of 30 something by early afternoon. The bride was worrying she was going to roast and the mother of the bride (me!) was wishing she didn’t have to get up quite so early...but, I hasten to add, she was full of excitement as well!

St George’s Anglican church, Vernet-les-Bains, was the venue for the long-anticipated day; very grateful thanks to David for willingly agreeing to perform the marriage ceremony for my daughter, Rachel and her husband-to-be, Sam. The legal marriage was held the day before in the Catllar Mairie,  and was for family only.  Afterwards we walked across the square to our village Bistrot de Pays for a meal -and, quite by chance, live music- where we were joined by close friends. It was a fun evening!

But back to St George’s .......We were about 65 in all. The church was simply decorated, with gypsophila in the aisles and olive branches with ivy on the windowsills as per the bride’s instructions. Our great friend Lynn, the church’s regular organist, played the organ with her usual panache. The singing wasn’t bad at all  and the service itself, thanks to David’s combination of spirituality and humour, was just wonderful.
At the end of the service, the best man was just a tad late putting the music on, and the bride walked down the aisle without her bouquet......but all was well. In fact it was more than well. It was perfect.
Frankie Ward.

September / October 2017: Harvest festivities, a concert, and a shared lunch 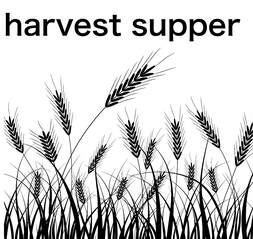 The Harvest Festival was celebrated at St George's church on Sunday 10th September. Members of the congregation brought gifts of dried and tinned goods which were later taken to the Secours Catholique in Prades for distribution to needy people in the area. Traditional Harvest hymns were sung and the bread Wheatsheaf , made by Geoff Donoghue, formed part of the decoration of the church.Our annual Harvest Supper was held in the evening of Saturday 16th September at Doug and Brenda Myer's house in Los Masos. ​Brenda had made some delicious game pies for the traditional pie and pea meal. All joined in with a sing-a-long after the meal. Earlier in the day, there had been a violin recital by Daniel Tosi (Ensemble Intercontemporain de Paris) which included music by Bach, Fauré, Ravel, Sarasate, Gounod, Schubert, Caccini and Tchaikovsky. Douglas and Brenda hosted their final shared meal of this year on Sunday 1st October before returning to Sheffield. Once again, we all enjoyed some of Brenda's delicious cooking - this time pork pie. Everyone else brought along salads and puddings to share, making it a wonderful occasion.

​A total of €130 was raised for the annual Poppy Appeal of the Royal British Legion, when the St George's congregation met at Olette for its traditional Wartime lunch.
​A simple menu of soup, corned-beef hash and bread and butter pudding was prepared by Lesley Phillips and Maggie Longworth.
Congratulations to Maggie for winning Lesley's entertaining quiz, and for sharing the victor's chocolates with everyone else!