July 2011: the installation of rev. david phillips as chaplain 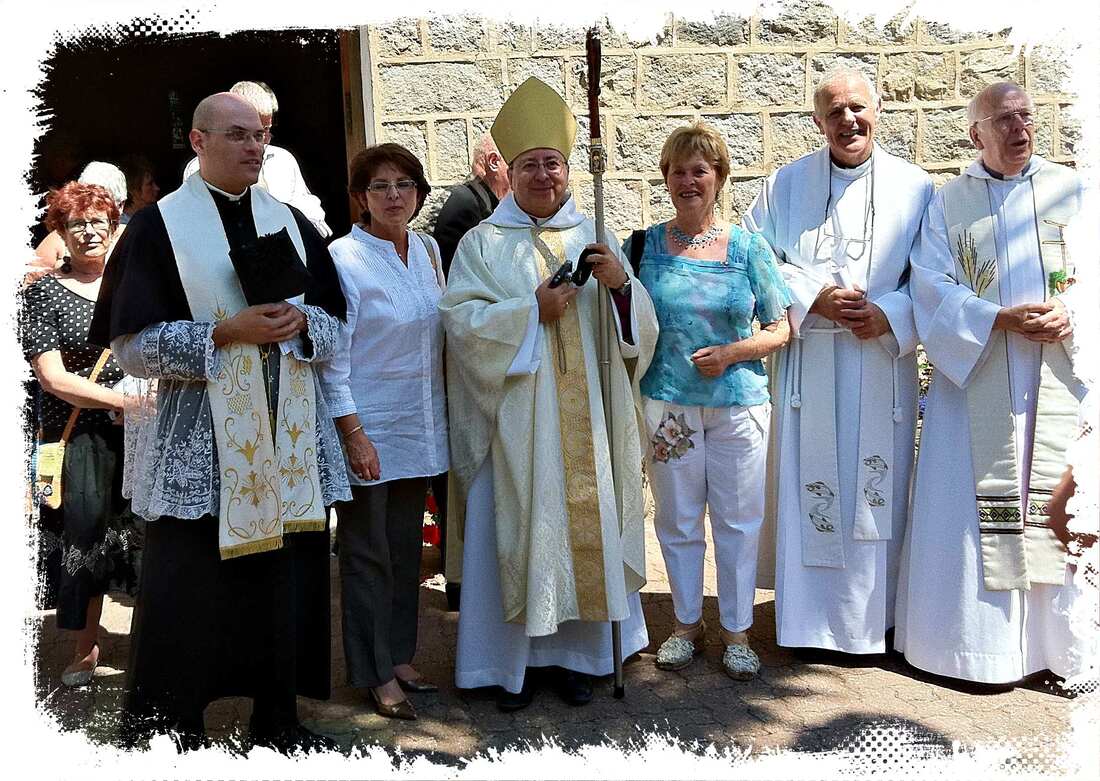 On Saturday 9 July, 2011, Reverend David Phillips was licensed as Priest-in-Charge of the Anglican Church of St George, Vernet-les-Bains by the Suffragan Bishop in Europe, Rt Rev Dr David Hamid. Formerly Associate Priest in the Benefice of Elloughton and Brough with Brantingham in East Yorkshire, David and his wife Lesley were to look after us unfailingly and with great love throughout the ensuing decade until his retirement in December 2020.

The licensing was a joyful event with a Church packed for the first time in many years with parishioners, friends, ecumenical guests and clergy and readers from the neighbouring parishes of Pau and across the Pyrenees in Madremanya and Barcelona. We were particularly pleased to welcome Abbé Christophe Périchon, the parish priest of St Saturnin here in Vernet, along with many of his own parishioners.

The service also marked the re-dedication of the building after work to renovate it. That work wasn't quite finished; it would be another few months before the building could be used on a weekly basis, but it marked a huge milestone in the Chaplaincy's life. After many years of planning and work, the future of St George's as a spiritual and cultural resource for both the French and British communities was secure. The Maire, Mme Brigitte Jalibert was on hand with her deputy, as the reopening of the church was very much a civic event as well. The Diocese had given the building to the municipality as somewhere to host cultural events throughout the year, with the agreement that it would be available to our congregation on Sundays and on one additional day per week.

A new stained glass window, depicting our patron saint, George, was dedicated during the service. The window was the gift of Doug and Brenda Myers in memory of their parents. As well as picturing St George slaying the dragon, there are images of family roots in Sunderland and Oxford (picture below).

A team of bell ringers, mostly from the north of England, with their own transportable ring of eight bells, rang before and after the service (see below). 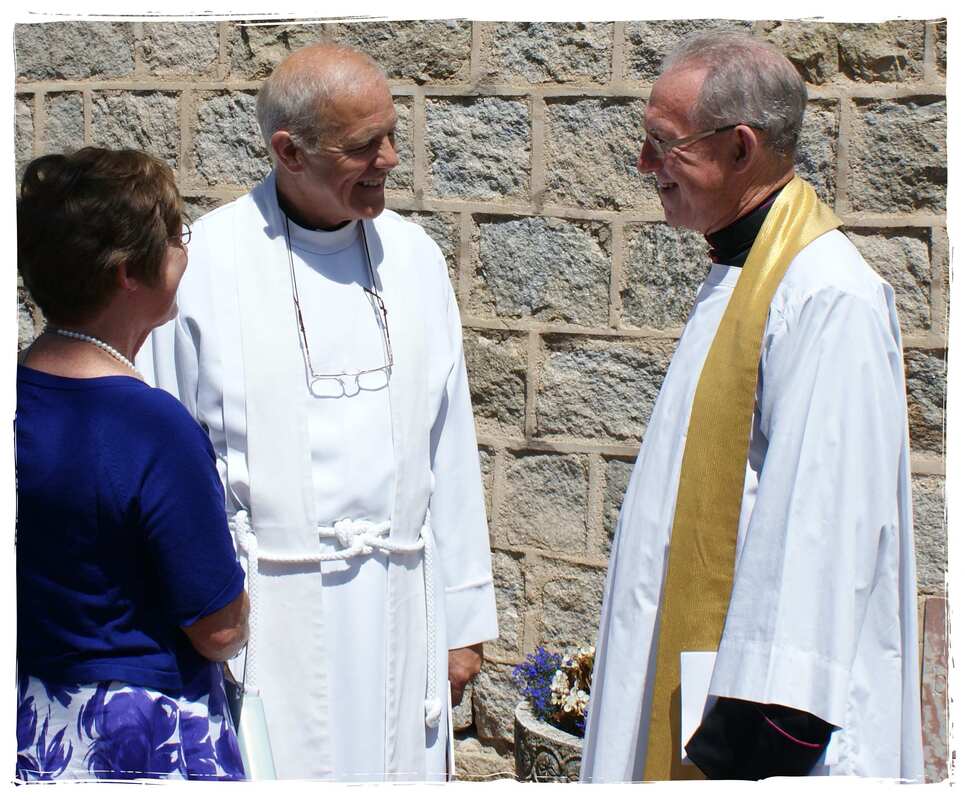 Ken drove all the way from and back to Nice on the day, and organised the donation by the Diocese of a commemorative gold chalice. 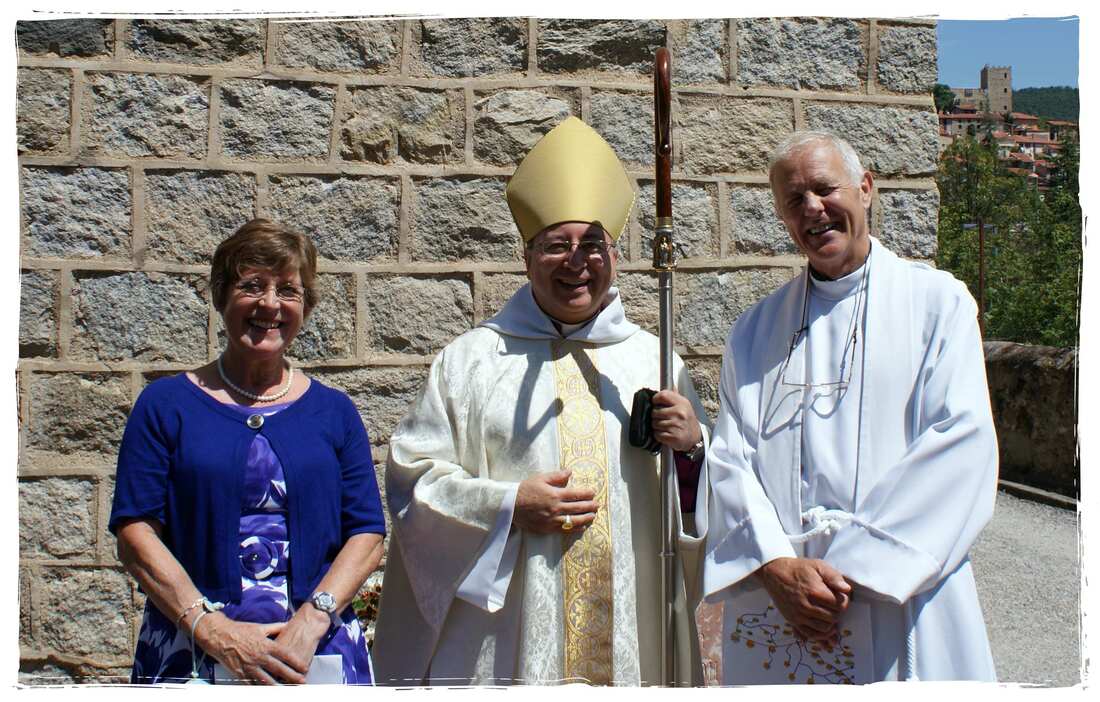 David, lesley and the bishop

the reception in the casino 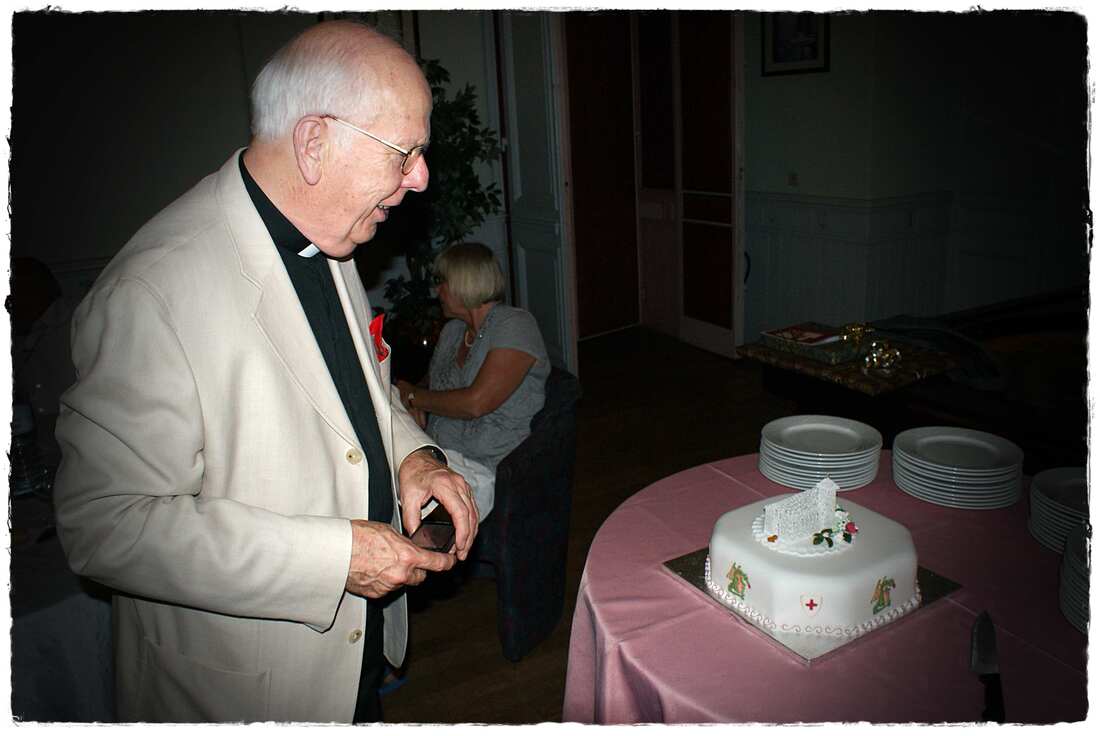 The splendid sugar model of St George's gracing the cake was made by Brenda Myers. Ten years on and it is still in service at the home of David and Charlotte Evans, where it forms the centrepiece of the dining table on special occasions. 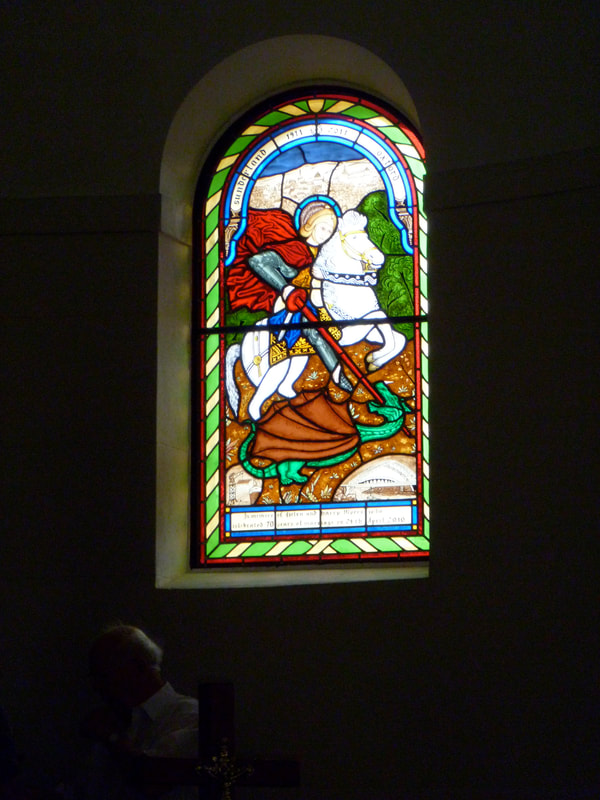 the new window, given by doug and brenda myers

english bellringing comes to the south of france

Installing a permanent ring of bells in time for the re-dedication was too ambitious even for mad keen bell-ringers and  part-time members of St. George's congregation, Jeff and Catherine Ladd. However, a solution appeared in the Spring, when Jeff and Catherine were invited to visit Alistair Moon in Senouillac, near Albi. Alistair lived in a former château and, finding that he missed bell-ringing when he moved the France, had acquired a "mini-ring" for his barn: eight small bells, the largest (the tenor) weighing just 10lb, set atop a frame made of several steel girders. Although the bells are considerably smaller than those you would find in a church tower (a 10cwt tenor would be a more common weight), they are attached to wheels and rung with ropes in exactly the same way. When Alistair mentioned that they could be easily dismantled and transported, Jeff and Catherine were quick to ask if he might be able to bring them to Vernet for the weekend of July 9th/10th. He needed no persuading! Another  part-time member of St. George's congregation, Michael Strutt, is a ringer, so the search was on to find a minimum of four others. In the end there were eleven ringers, including ex-pat ringers from Provence and Germany, and even a couple, Roger and Sue Green, who travelled all the way from Ilkley in West Yorkshire by train. The bells arrived on the Friday afternoon and, with help from the church treasurer John Shearman, they were erected inside the entrance to the church. A practice session was held in the evening for the ringers to get used to ringing such tiny bells. A quarter-peal of Plain Bob Triples (bb.ringingworld.co.uk/view.php?id=30095) was rung before the induction service on Saturday and the bells were also rung afterwards, prompting much interest from both English and French members of the congregation. A full peal was attempted after lunch in honour of the occasion. A peal, as you may imagine, is four times the length of a quarter-peal and comprises at least 5000 rows, in which each bell sounds once. Moreover the order of the bells within each row has to be different, so concentration and stamina are required, especially in the boiling heat of a Mediterranean summer. Sadly, on this occasion, the effects of the sun after a fine lunch proved too much of a challenge and the peal was lost with about 30 minutes remaining. Undaunted, the bell-ringers returned on Sunday morning to  welcome the congregation with handbells. Following the service, another peal was attempted on the mini-ring. Thus time, 5040 Grandsire Triples was successfully rung in 2 hours and 24 minutes (bb.ringingworld.co.uk/view.php?id=30096).  Finally, to round off the weekend's activities, a peal of Yorkshire Surprise Major was rung on the handbells: same rules, but this time with each member ringing two bells each (bb.ringingworld.co.uk/view.php?id=420698). Catherine wrote " We were delighted to be able to make a genuinely English contribution to the weekend's celebrations and it may be that in the future, when St. George's is in regular use, getting our own bells could be on the agenda. With a proper system of sound control they should not annoy the neighbours and they would bring plenty of tourist business for the town for, as we have seen, keen bell-ringers will travel a long way for something new and different." In a sad sequel to such a happy day, all three of the ringers who at the time were suffering from cancer, Catherine Ladd, Roger Bailey and Roger Green have since died, all far too young. It's a fitting tribute to them, and to Catherine's prophetic words, that St George's should now be so close to having a permanent ring of bells. 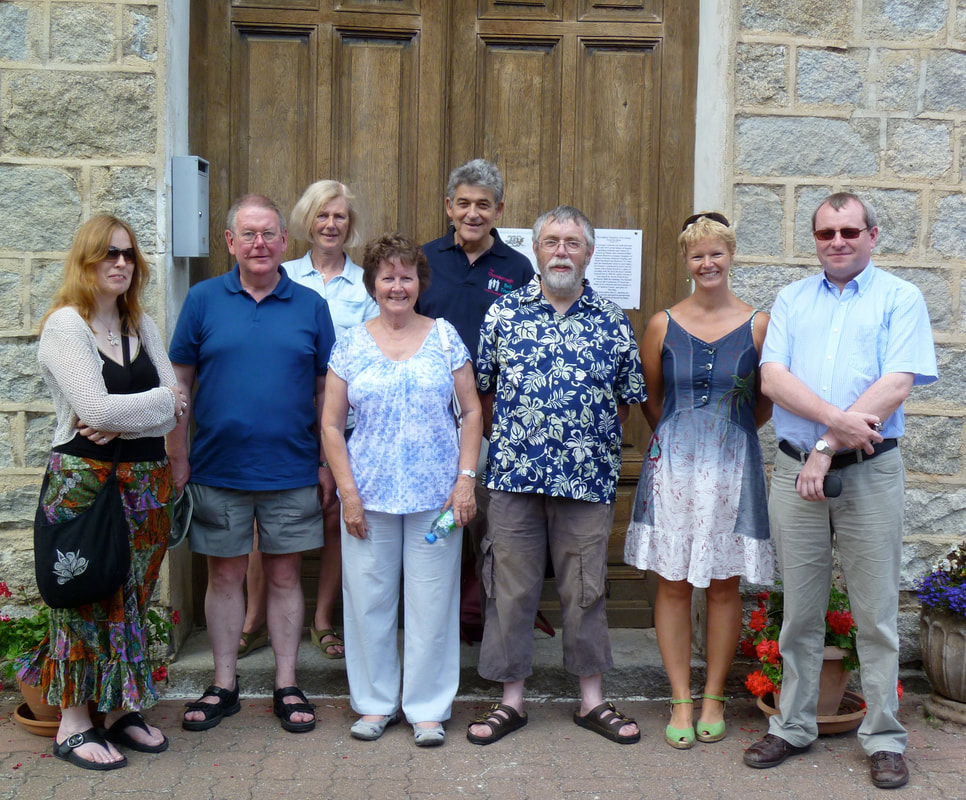 The band who rang the peal: 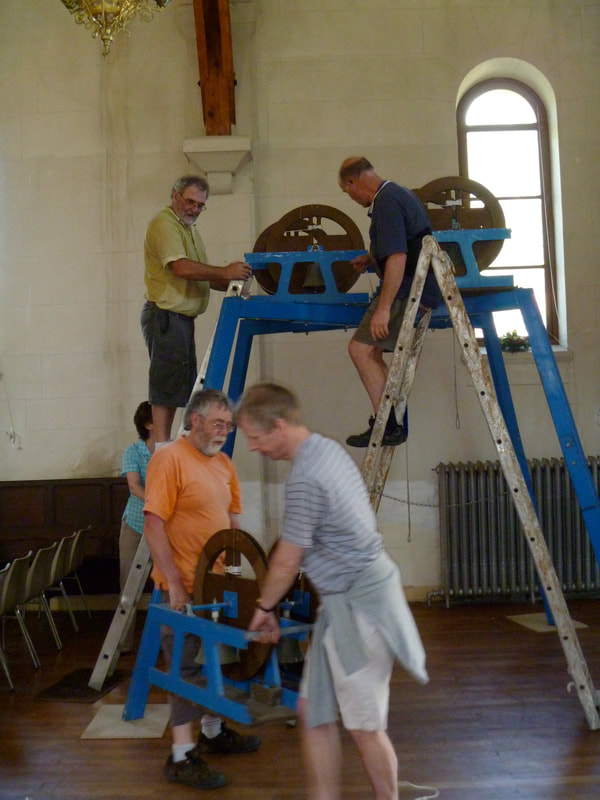